Three years away – but something to anticipate !

At Jumeirah Village Triangle, Nakheel has just announced that residents can look forward to preferential membership rates at the planned leisure club at Nakheel’s new hotel at the Al Khail Avenue mall, due for completion in 2019.

The 18-storey, 256-room hotel, to be managed under the Double Tree by Hilton brand, includes a pool deck, gymnasium, lounge, all-day restaurant, coffee shop and lounge. It will be directly linked to Al Khail Avenue’s 350 shops, restaurants and entertainment outlets.

Nakheel has published the following rendering of the expected leisure club: 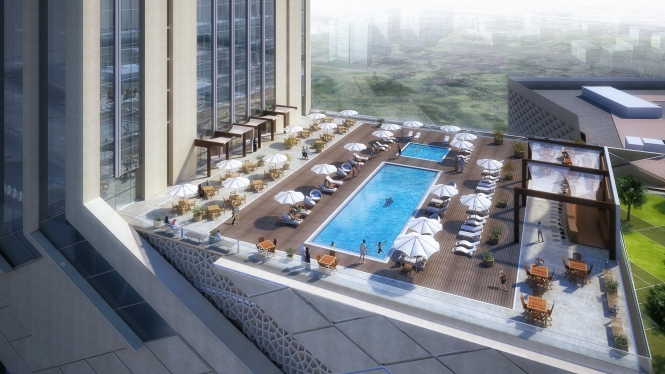 We’ll have to cross the road, but due to open first in 2018, Nakheel is creating a new community club at Jumeirah Village Circle by adding a pool, sports and restaurant complex to the roof of The Circle Mall. The JVC Club will feature a 300-seat restaurant, a swimming pool and sundeck, two tennis courts, a gymnasium and landscaped gardens, with views across the main community park.

The JVC Club will be located at the top of The Circle Mall, Nakheel’s 400,000 sq ft retail, dining and entertainment hub that is currently under construction.  Around 25,000 people already live in JVC, with a predicted population of 300,000 when the community is fully complete making this club a needed recreational venue.

The Circle Mall complex, due for completion next year, will have 235 shops, restaurants and entertainment outlets across three floors.  Among them are a multi-screen cinema, Spinneys supermarket and a Faby Land family entertainment centre. There will also be a host of fashion, home and electronics stores, and a wide range of cafes and restaurants.  The mall complex also includes a mosque that can accommodate up to 300 people.

There is no need to wait to swim and dine as Nakheel already has a lovely clubhouse close by. If you aren’t aware, the Jumeirah Islands Club offers favorable rates to residents of Nakheel communities. With their beautiful swimming pool, gym, restaurant and bar, it’s already a favourite destination among many Villagers.

One thought on “Leisure Club for JVT”

Landscaping improvements in JVT. Looking beautiful!
Did you know that there are karate classes right here in JVT? Get all the details on our community website (link in bio)

Visit the ACTIVITES page to see what's on offer. Latest classes now in JVT include drama, swimming, soccer and basketball ! Check out the CALENDAR for all events & class timings! The next four classes for today are listed below.
Follow Jumeirah Village Triangle on WordPress.com