With ‘Makani’ and the new street signs just announced this week, JVT residents fear no more! Being lost in JVT will soon be a thing of the past. No more waiting hours for your food delivery. Visiting friends should find you without circling hours around the neighborhood!

Have you seen these? The promise that it will be possible to navigate around JVT with ease… 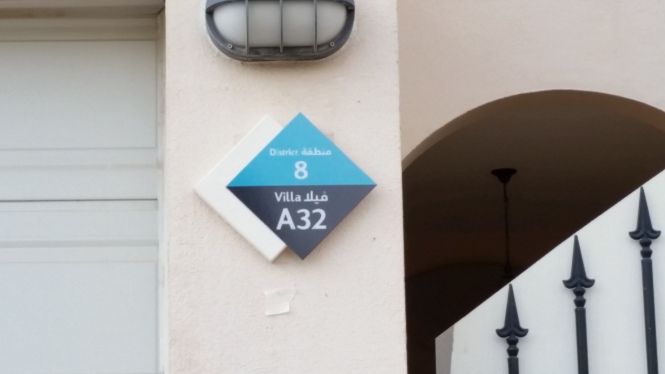 Coming soon to a villa near you!

Nakheel has even designed a new community map. It’s color-coded by district. With three shades of blue and two shades of green, it is not clear that the color system will help much, but at least every villa and townhouse will display the district number. You’ll note that each house now has an alpha-numeric code.

Overall, this represents a clear improvement. Looking forward to seeing if there will be any other directional or way finding signs in the future. Personally, I don’t care for the road-side advertising that recently sprung up along Tulip Street and wonder if the fees will at least be re-invested in community  development projects. Let’s ask Nakheel. 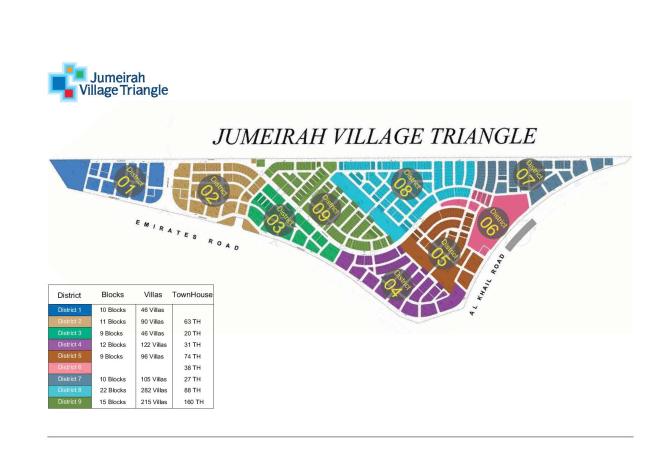 It looks like things are moving and the road through Jumeirah Park should soon be re-opened. 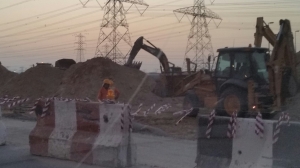 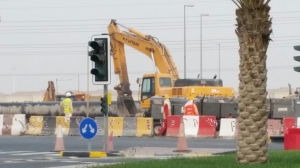 ‘Makani’ – this must be what Nakheel has been waiting for!

Under the new ‘My Location’ system, every house and building in Dubai will now have its own unique number. Enter the number on http://www.makani.ae and bam, you’ll be effortlessly transported to your destination on Google map. Beam me up Scottie! Well almost. Ask the site to give you directions or convert your Makani number into GPS coordinates to text to the person looking for your place. Nothing easier ! I’ve tested the new online system which seems to work effortlessly.  I’m not sure why the App requires access to my contacts, however, so I think I’ll hold off on downloading this for now. At least we can certainly expect food deliveries, taxis and ambulances to find us now, even in the black hole of a Triangle where we live.

With this new initiative, we can clearly say ‘welcome to the future’! Have you seen anything this amazing elsewhere?  DXB Vision 2021 has just made street signs obsolete. Let’s hope Nakheel is clued in and doesn’t waste any more of our money by investing in superfluous signage. Why bother now. We’ve managed for four years without any and now our smart city has given us a fantastic tool. You have to love Dubai! I certainly do. Nevertheless, I will miss the creativity of all my neighbors and their hand made signs.

Here are some images of the JVT hand-made street signs (and the few ‘test’ signs made years ago) for the nostaligic at heart. 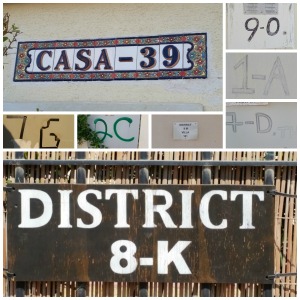 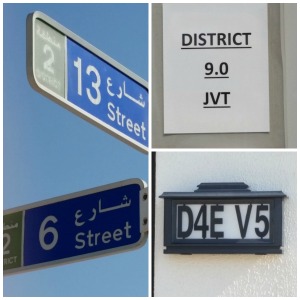 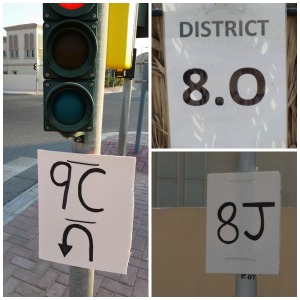 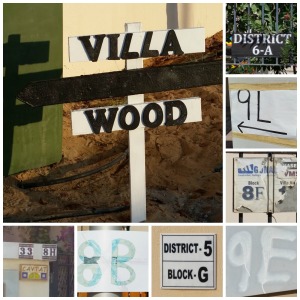 It looks like traffic relief is coming to residents in the JVT, JVP and JI neighborhoods soon. Qarn Al Sabkha road to open Friday.

This seems to be the new collection of fly-overs at the far end of Jumeirah Park which will now link all the way to Sheikh Mohammed bin Rashid Road (old Emirates Rd).

Here is a picture of the road access being opened Friday morning. Who has tried it? 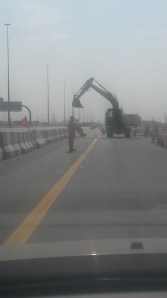 Check out the story in today’s Gulf News

It’s been some time since I’ve been able to post to the community. Have you all missed me?

I imagine that alot of you can understand how one get’s submerged with work or family duties. With the onset of summer I am eagerly awaiting what I feel is a well-deserved break from the routine! As Ramadam begins and the summer heat sets in, it’s time for us all to let up on the gas pedal, even if slightly, enjoy time with family and some days off. Before then, I want to get these recent community reports I’ve received out to all my followers in JVT.

The most recent news I’ve had about security and safety in JVT concerns the theft of motorcyles. It’s important we all stay vigilant and together we can ensure our community stays safe.

On June 9th, a fellow resident wrote to inform me that he had learned a motorcycle was stolen in JVT District 4, in the daytime. He had a direct experience a week before when a thief attempted to steal his bike and he awoke to find a broken lock. That same night, an attempt was also made to relieve his neighbor of his motorcycle that was chained up in his car port in District 9. Police and security were called but certainly a watchful community can also do alot to curb stealing. He’s also learned about the case of a stolen motorcylce in the Springs. This sounds like a repeat offender is about and we should all concern ourselves with theft to prevent such offences.

This concerned resident tells me that in the last year a few other items were taken from his yard including a garden hose and even a pair of old flip flops !

About two months ago, I had another message from a female resident. She’s a regular runner in JVT, for about three years now, in the early evenings or early on weekend mornings. She had started noticimg a suspicious white Nisssan Sunny that seemed to be following her about on a regular basis. The incidents were reported to security and she noted an increase of police presence after that. If others have noticed similiar concerns about their safety, make sure this is reported and unwanted visitors are kept out of our neighborhood.

Stay aware, be sure to question any suspicious characters lurking about and call the police to report anything out of the ordinary.

Nakheel has informed residents that road repairs will require road closure as of 21st April. Hopefully this won’t last too long ! 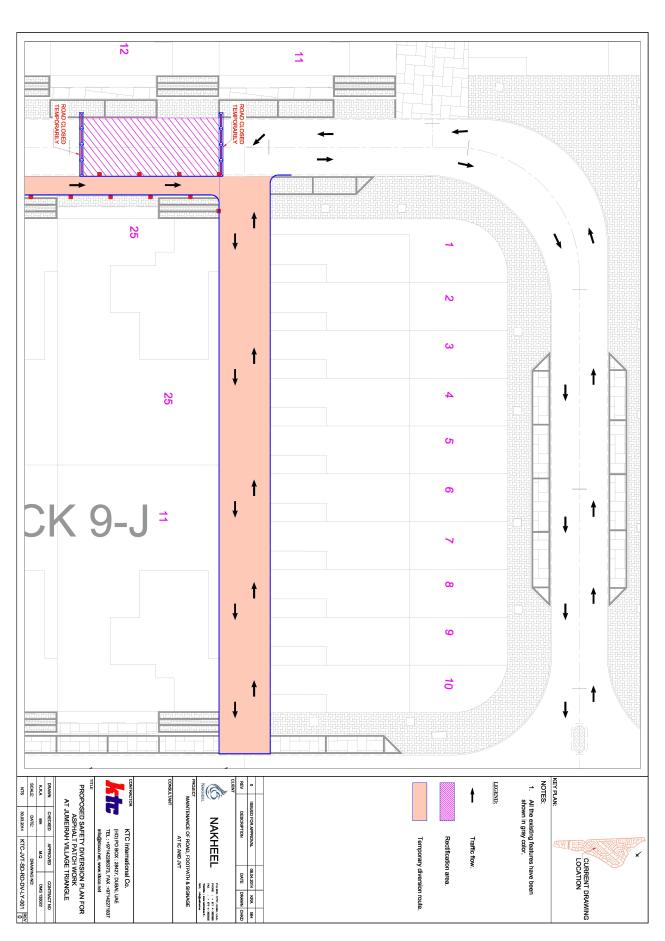 A fellow resident recently enquired about the road access in and out of JVT. Here is the reply from Nakheel which may interest all residents:

The road you are referring to is an RTA road and a portion of JVT non- permanent road. Please use an alternate roads which are permanently paved and in good condition. As per our master plan, there is no permanent road through this exit. We only allowed it temporarily while waiting for the RTA approval for the proposed of other gates. We are following up with RTA to construct and complete 2 roads as follows:
•             The existing link to Jumeirah Park to be completed as per the relevant standards, this is on the process of approval.
•             A new road link to be constructed between JVT and The Springs on the other side.
Hope this clarifies your queries, for any further clarifications, please do not hesitate to contact us directly.

The Gulf News has recentely reported on the tendancy of JVT residents to jump the red lights. I have seen my share of poor driving and speeding in JVT. I am not defending this unacceptable behaviour. It is worrying when you have young children or risk yourself being struck down at a pedestrian cross walk.

However, I must also admit that when the traffic lights were first installed a few months ago, I didn’t realize that each of the four corners on several intersections have alternating green lights! Therefore, the cars facing you at the traffic light may continue straight while you are stuck in your car on the opposite side at a red light. They are not blowing the light, it’s actually green for them as it has a left turn green signal as well. So, before immediately jumping to conclusions and honking at that ‘bad’ driver, make sure they indeed have a red light!  (This photo from the article does not actually support the claim….)

Nevertheless, this dangerous practice should not be tolerated.

Having recently returned to JVT after a long summer holiday, I noticed all the new street indications with joy.  Luckily we still have the home-made models that help us get around. 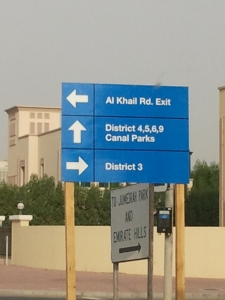 At long last, JVT has some directional signage. 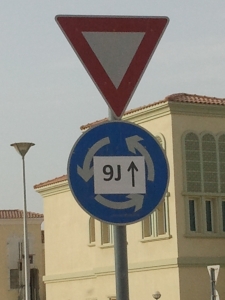 Last week, homeowners received a notice explaining that Nakheel has now decided to help us find our way. It has been nearly four years since the the first homes were handed over. Better late than never as the saying goes! We’ve also learned that these directional signs are only temporary. Yes, at long last we can hope to have actual street signs, preferably on every street corner. With luck, these rare beauties showcased below will make their appearance throughout JVT. Wait and see. 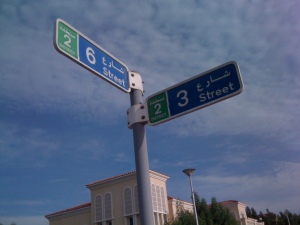 Wouldn’t it be nice to have more signs like this.

The other big news is that JVT, which is already a thriving community, will soon become a ‘gated’ community. With some luck, this might help reduce the number of missing items people are regularly posting about on Facebook. Presenting a pass at the entry gates may or may not stem such unseemly behaviour as petty theft. Frankly, I would rather some time and effort be spent on improving the road access leading into and out of JVT. Priority might also be given to sign-posting the main entrance off the Sheik Mohammed bin Zayed highway, for example? What do you say?   (Leave a reply below.)

This is the original note from Nakheel:

We are pleased to inform you that a decision was made by Nakheel Management to convert Jumeirah Village Triangle into a gated community. Nakheel Asset Management & Infrastructure (NAMI) is committed to providing a safe and secure environment for Jumeirah Village residents.

We are currently in the procurement phase for the necessary material and works. We will be able to share with you the program of works once made available.

Yesterday, for the first time,  we were able to access Al Khail Road in a safe manner. It felt like an early National Day present to all those living in JVT! You no longer need to pass over the gravel path and exit through the back gate cutting across sand and treacherous ditches. The access road to reach Al Khail is open and it’s a smooth ride that now takes you out of JVT. Once out, you can either immediately move over into the left hand lane to enter the round-about and circle back to take Al Khail road toward Dubai. Or you can access Emirates Road in either direction for Dubai or Abu Dhabi.

As today is National Day, one must admire and reflect upon the amazing growth of the UAE and particularly on the incredible feats pulled off by Dubai. While some of us may grumble about the road-works and various other inconveniences associated with rapid growth, you must nevertheless appreciate and marvel at the impressive infrastructure of this great city.

Of course, we still eagerly await more improvements such as the opening of the u-turn access on the Al Khail round-about that will allow travelers from Abu Dhabi to turn around and return on Emirates Road to access the JVT main gate. Easier access to the Springs road (Hessa street) would be nice as well. With luck, maybe one of those will be our New Year’s gift from Nakheel ! 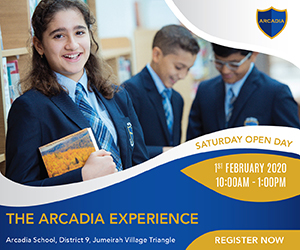 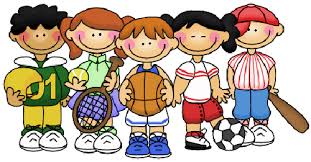 Landscaping improvements in JVT. Looking beautiful!
Did you know that there are karate classes right here in JVT? Get all the details on our community website (link in bio)

Visit the ACTIVITES page to see what's on offer. Latest classes now in JVT include drama, swimming, soccer and basketball ! Check out the CALENDAR for all events & class timings! The next four classes for today are listed below.
Follow Jumeirah Village Triangle on WordPress.com