Are you as curious as me to know more about Arcadia Preparatory and the immenint opening of their new secondary school? Here is your chance to get an update on what’s happening. Are you thinking of switching schools? This is the right time to find out more about our great neighborhood school!

Sign up with your kids to attend the next Arcadia Experience. Don’t miss out! 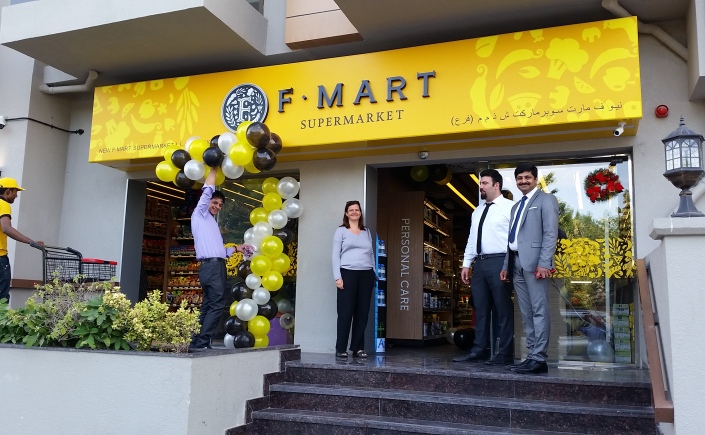 We are delighted to announce that a new grocery shop has opened its doors in JVT. Today was the grand opening of F-Mart.

Great coffee, just baked baguette, a fantastic fishmonger, fresh produce and just about anything you might need can all be found now in District 2! Check them out and tell John that the JVT website sent you! 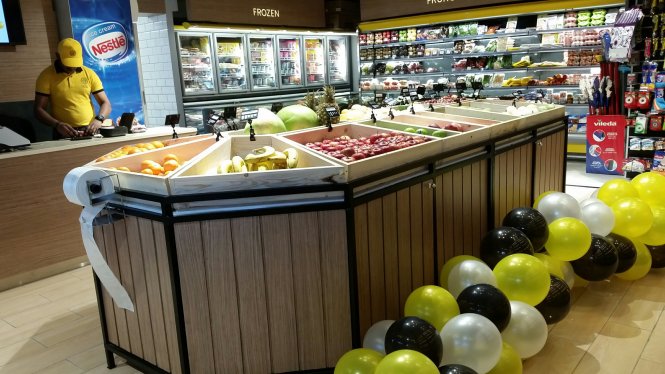 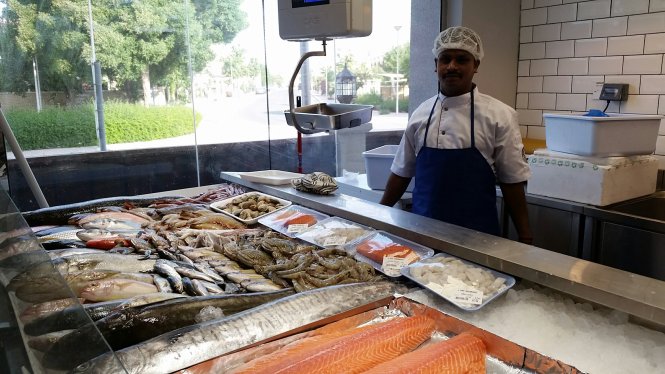 The JVT Community Website is pleased to share all Nakheel notices with residents. This website is maintained by residents, for residents. We are not affiliated with the master developer. Kindly direct your questions on the community policies to the Nakheel customer service (JVT.Community@nakheel.com).

See details on flyer below: 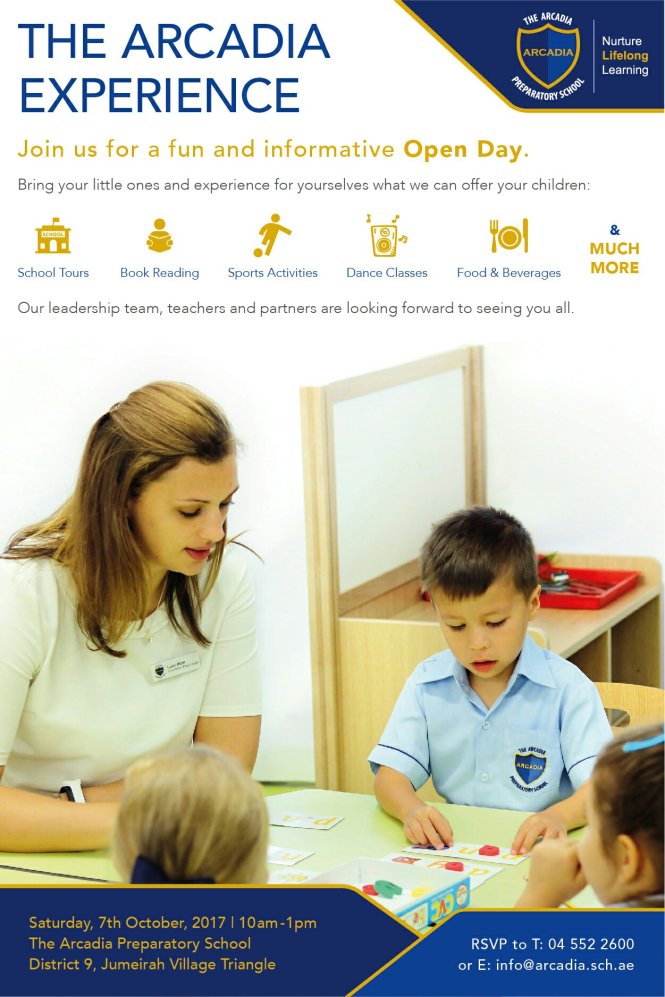 Nakheel has recently shared an important message about Home Safety over the holidays. The JVT Residents blog is happy to forward this information which you may wish to consult.

Dubai Police run a Home Safety Programme, a security scheme designed to protect homes during long periods of absence, such as summer holidays.

Click here to access a PDF on the scheme guidelines and information which includes an application form to sign up. For further information or additional enquiries on the Home Safety Programme, please visit www.dubaipolice.gov.ae

We’d also like to recommend that neighbors look out for each other over the summer period and report any suspicious activity around the neighborhood to the JVT security (Tel: 04 390 3333 or 04 375 9944).

Looking to keep your children active and engaged this summer?

Working parents will be pleased to know that the Arcadia Preparatory school is offering a wonderful summer camp opportunity right here in the neighborhood. 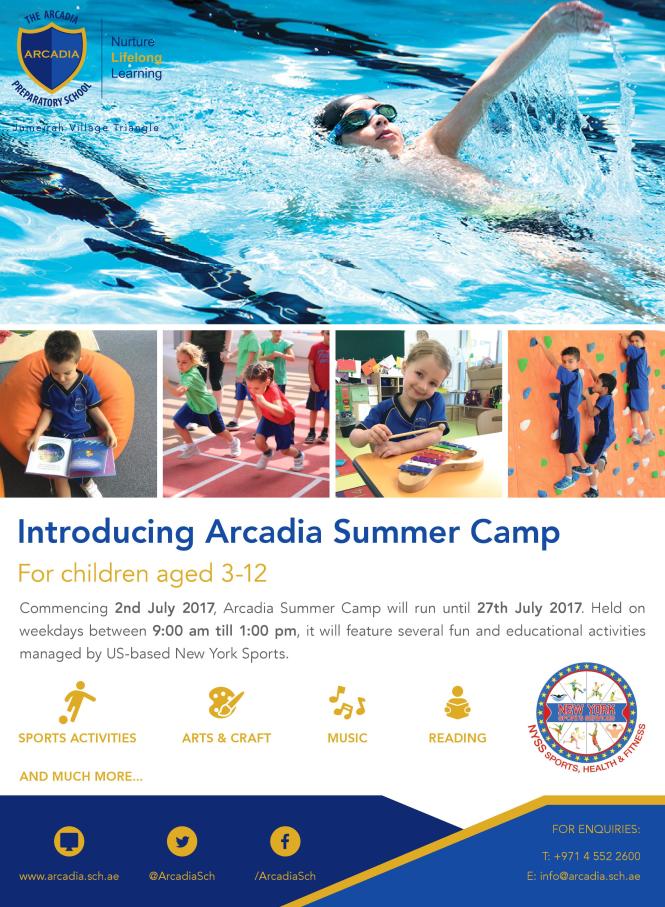 Many JVTers have responded to the call, but more support is needed. All throughout Ramadan, the fridge initiative is providing sustinence to the needy among us.

Here in JVT, there are many less fortunate – our gardeners, security guards and the hundreds of labourers building our new shopping malls and the surrounding apartment buildings.

The JVT Ramadan fridges run out of stock several times a day. Yesterday, my family and I filled two fridges and met one of the wonderful fridge managers who told us about the daily ritual of filling the fridge and the many workers stopping by for a refreshment or some fruit. 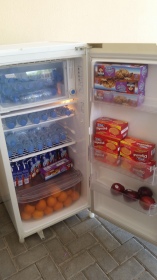 Here’s where to head:

If you want to know more, sign up with the Facebook group Ramadan Sharing Fridges in the UAE  or read the recent Gulf News article featuring our own JVT resident Alison Wade!

Leave us a comment about how you are helping others this Ramadan and inspire more action.

In line with the standard pest control requirements of the Dubai Municipality, please be informed that we will conduct fogging treatment in the external areas of Jumeirah Village Triangle on Wednesday 26 and Thursday 27 April 2017. The process will begin at 4.00am on both days, and will last until 6.00am.

Kindly note that our pest control service provider is certified by the Dubai Municipality and that the material used for this procedure is DM-certified. The timing selected for the treatment also follows the standard set by Dubai Municipality.

As per Dubai Municipality guidelines, residents and their families are advised to stay inside with doors and windows closed during the procedure. Pets should also be kept inside if possible.

We apologise for any inconvenience.

For any enquiries or feedback, please contact us directly at JVT.community@nakheel.com

Assuring you of our best attention at all times. 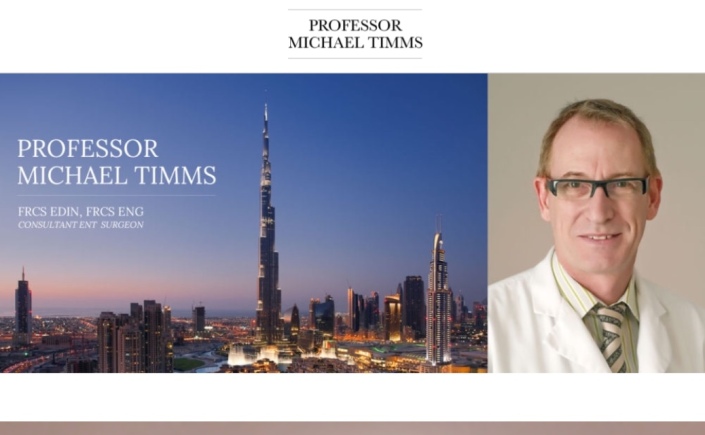 Today is World Health Day and the perfect time to write about one of our newest residents. Dr Michael Timms is a Consultant ENT and Cochlear Implant Surgeon who recently moved in to Jumeirah Village Triangle. After almost 7 years in Riyadh, he and his family have returned to Dubai and settled in JVT last fall. He decided to move back to Dubai primarily for his family and the enjoyable lifestyle. This time around, he chose to be self employed and also enjoy the freedom to work at several clinics and hospitals setting his own timetables. “Thirty six years as an employee is more than enough and I wish I had done this (self-employment) years ago,” he explained.

Dr Michael surely must enjoy the freedom of being your own boss. He also seems to have a great bedside manner. For some reason, I find that so many doctors I have consulted (and there have been quite a few) generally see me as a number – another patient, another illness. It often seems like a big racket to me, getting in the most patients per day, ordering many tests and never particularly looking for the root cause just prescribing another pill. It was quite refreshing to hear from Dr Michael about his approach. “I get patients of every nationality telling me I am the first doctor who understood their problem, looked them in the eye while listening and explained the treatment plan so they feel part of it,” explained Dr Michael. “The thing is, I don’t see why this should be special, as it costs me nothing and feels natural,” he commented.

He treats all ENT conditions in adults and children. I plan to look him up for my daughter’s next ear infection which seems to be a regular occurrence in my life! You can call on Dr Michael for all the routine things like tonsil & adenoid problems, ear infections and sinus diseases. He also handles more complex things like Cochlear Implants for babies born deaf, rhinoplasty for people with noses they don’t like and endoscopic relief of obstructed tear ducts. I’ve also learned that if you have someone in the household with a snoring problem you might want to consult with Dr Michael as he is an international teacher on ENT and surgery using a minimally invasive procedure called ‘coblation’ (Google it!).

When I asked him about some fun stories to share, he told me about doing live surgery in front of medical audiences in 42 different countries which he calls ‘great fun’! However, being rather queasy myself, I wasn’t too keen for details. “I wanted to be a doctor since I was a child. Dissecting animals at school made me want to be a surgeon,” Dr Michael told me. “I am no saint, but there is something very rewarding about fixing peoples’ problems and getting thank you’s many times a day. Operating is great fun if you do it well and I feel incredibly lucky to have a job that is also a hobby. I actually like going to work,” he said.

One of his more recent amusing moments was seeing three sisters all with the same problem of snoring. Instead of seeing them individually, I interviewed them as a group. It was like having a party, with a lot of giggling as they tried to describe keeping everyone in business class awake with their symphony of snoring. They all had the same abnormalities causing the problem and will end up having the same treatment. I don’t know why, but the whole thing made me crack up.

If you need an ENT specialist, he can be found for consultations at a variety of locations – at the nearby Saudi German Hospital, at the Advanced Hearing & Balance Centre in WAFI Mall and Al Zahra Hospital in Sharjah.

Dr Michael Timms is qualified in Leeds, UK in June 1980. He completed his higher surgical training in Manchester and became an ENT Consultant in Blackburn & Burnley in 1992. He was clinical director of ENT, Ophthalmology & Maxillo-facial Surgery there until April 2010. He then became ENT Consultant & Cochlear Implant Surgeon at King Faisal Specialist Hospital, Riyadh until moving to Dubai and has been living in JVT since September 2016.  Since he’s in the neighborhood, he might even do a house call as follow up to any post-op procedures if need be!

Visit the ACTIVITES page to see what's on offer. Latest classes now in JVT include drama, swimming, soccer and basketball ! Check out the CALENDAR for all events & class timings! The next four classes for today are listed below.